“Mine!” was among the first words I’d ever blurted out. Not “Mommy,” not “Daddy;” but a claiming word declaring that something belonged to none other than me. I was never one for sharing. Selfishness mixed with a penchant for competitiveness, a dramatic imagination, and a fear of abandonment gives you my long-time companion: the green-eyed monster.

The green-eyed monster endowed me with special powers. I could sense a threat coming from a mile away. Take one glance at my object of affection, and you had just imprinted yourself on my radar for life. Come near us, and I’ll smile; but I would be plotting ways to make you go away forever. Now, don’t fret. This isn’t an article disguised as a murder confession; I never took jealousy that far (only in my head). Rather, take this as a cautionary tale from someone who knows what it was like to have everything to lose and what it was like to live in fear when everything that I claimed as my own was up for grabs.

One of my earliest memories is of me standing at the bottom of a staircase, mourning the imagined death of my parents and dreading that most unwelcome day when they would die and abandon me. I stood there weeping for hours while my parents were in the next room watching TV.

The fear of abandonment followed me throughout my life, causing me to become all the more insecure as I grew older. I took quick emotional possession of friends, attaching to them for dear life so they might never leave me. Third-party friends weren’t ever welcome. But it turned out that things just didn’t work like that. My friends wanted to hang out with other friends, which baffled me because they had me. Why would they want anyone else? I eventually came to the conclusion that I was unworthy. Those third-party friends, in all their coolness, unwittingly had me believing that I was inferior. I obsessively compared myself to them, and I was always the one who came up short.

For self-preservation, I eventually began to befriend people only to neglect and dismiss them before they could find me out as the undeserving person that I thought I was. I did the same thing with romantic relationships. I created a predictable system in which the relationship was under my control. I decided when the relationships ended, and therefore, no one could take anyone away from me because I would have already detached myself. If it so happened that they left me before I could leave them, I would remember that it was only right that they did. I had already predicted that that day would come anyway. My self-fulling prophecy proved I was right each time. And always being right was a wonderful feeling.

Self-fulfilling prophecies nourished my green-eyed beast and it thrived well into courtship and even marriage with my husband. Passions were at their highest, and the monstrosity of my jealousy was at its worst. The very same qualities that drew me to him, such as his sense of humor and warm nature, when directed towards other people, became ones I resented. In my eyes, he was flirting.  Even when I myself knew that I was imagining his deviousness and plans to leave me, I made it plain that I was on to him and accused him of infidelity. He would deny it, but I remained happier in my delusional world. Predictability was a necessity, and my preoccupation of his leaving me provided a familiar and safe place in my mind. I further justified my jealous behaviors by telling myself it was because I loved him so much.

Years passed, and I knew that the monster was roaring with laughter at me. Couples’ therapy only seemed to point out all of my flaws, an opportunity that the monster feasted upon. It saw me continue my accusations, destroy our pictures and souvenirs, and turn over and break our furniture.

And yet somehow, we were still together. I was confused by this, and confided in a friend one day. As I got around to embellishing my suspicions of his cheating, my friend grasped my hand, looked me dead in the eye and said, “Stop it. If you keep doing this, he will leave you.” That was the end of my tale.

I went home that day and found a cloth bracelet upon which I wrote the words, “Stop it,” to remind me to take control of jealousy. Wearing this bracelet was one of the first steps I took toward having compassion for myself and slaying the monster.

When the bracelet started to lose its effect, I was determined to treat jealousy as an emotional and mental infection and return to reality, which proved to not be all that bad. I was proven wrong for I hadn’t been abandoned, and I hadn’t left, either. Our new furniture remains in tact, and I found a vast field for my wild and creative imagination to frolic through writing. Instead of conjuring up stories about where my husband could be or whom he’s with, I’ve chosen to focus on how secure he makes me feel. I also rediscovered the joy of hiking and taking my dog out for adventures.

I know that the monster lies dormant somewhere. From time to time I feel it stir and must ask my husband for reassurance. But as I look over at him who’s now laughing at the TV with our son, I remember that I’m not alone. 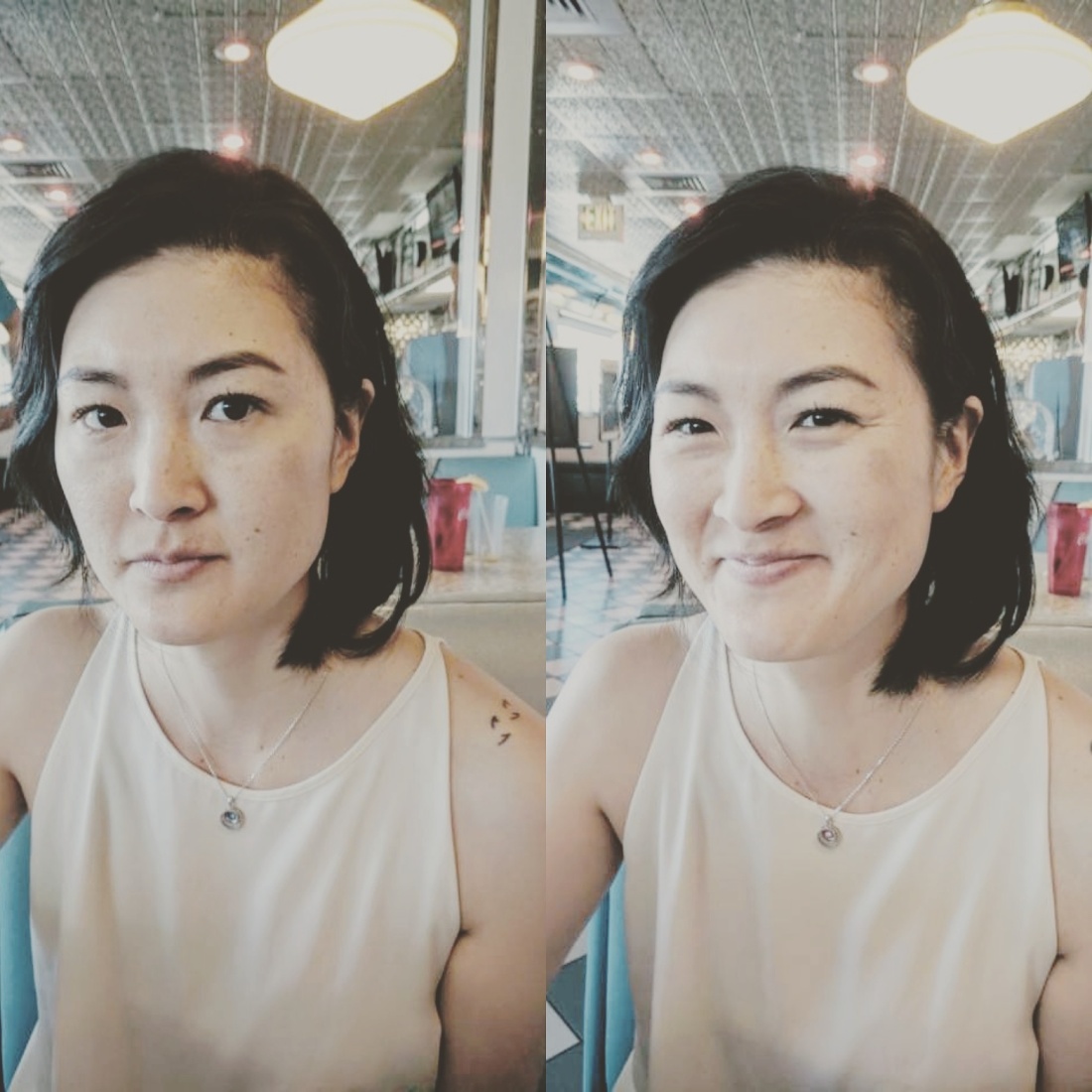 Love is kind of an asshole if you think about it. Love is a selfish, scheming creature that has its own timing and agenda with absolutely no regard for your feelings. It’s never there when you seek it, no matter how much you want it or how deserving you are.

You’re lonely, and on some days, desperate; but love won’t come to your side. You were voted “Best Looking” in high school and you still have a rocking bod; love has no interest in aesthetics. You enjoy a successful career, give to charity, and have a heart of gold. Love just yawns and shrugs.

If you’ve already discovered the nasty nature of love and you’re now over it and focusing on other things in life, then let me be the first to congratulate you. You, my friend, have bright days ahead because you’ve outsmarted love, and you’re saving yourself from much regret, heartache, and frustration.

As for me, I was on to love’s crafty ways. In fact, I figured it out a very long time ago in my puppy love days. One might ask, what does a child know about love? A lot. Sure, my experiences with it were short-lived with a different love each day. Nonetheless, I feverishly chased those boys as if it were a matter of survival, and didn’t think twice about professing my love to them. It was excruciating; but, it was real love. Alas, unrequited love; still, love.

Call me a romantic or a masochist, or just plain idiotic, but even though I already had tasted love’s torment, I persisted in my hot pursuit of love. It defined my twenties, all summed up as monthly boyfriends, blind dates, meetups disguised as volunteer and recreational groups, and online dating websites. I even devoted myself as a student of love, literally. I chose interpersonal relationships as the emphasis of my communications major, and wrote my last scientifically researched college essay on breakups. My idea of recreation was studying the art of seduction and devouring books and podcasts on relationships. I thought that if I worked hard for love and wanted it badly enough I would eventually obtain it, like the American dream or something. But, love proved unpatriotic.

Dating was exciting at first, but the thrill of dressing up and going out with someone new grew stale and eventually all of the time and effort I invested became downright embarrassing. It wasn’t just that these guys, almost simultaneously, were making up their minds that I wasn’t the one for them. It was also having to deal with the strong suspicion that even the universe was rejecting me in its ignorance of all my good intentions and noble proactiveness. Dating became a source of pressure because after meeting the eleventh guy in two weeks, there just had to be some kind of cut off point before someone stepped in and created a happy ending with me.

By 28, I was done with the chase. I decided to put love on hold (as if I were going anywhere with it). I was as lonely and cynical as ever, and I felt extremely compromised. And what’s a girl to do when love doesn’t work out the way she had planned? Dye and chop off her hair, prioritize career goals and re-discover herself. I took it a step further and decided to skip the country.

The plan was to continue my teaching career and start afresh in China. While love was uncooperative and difficult to acquire, the job market in China was merciful and sympathetic to me. I immediately got hired by an elementary school, had all of my documents verified, and I was set to go in a month’s time.

And then, one Friday night, I went to a bar and met my future husband. China never happened.

I didn’t necessarily have my life in order nor did I make a significant improvement on myself before meeting him. What is significant, however, is that love found me when I finally learned to turn my gaze from it, and focus elsewhere and inward. When my husband found me, he didn’t have my beefed-up online profile to reference. He didn’t catch me sending him come-hither looks while I pretended to pack food for the hungry. He saw me, in all my imperfections and emotional baggage, but as someone in love with herself.

Love, in its supreme selfishness and lack of respect for plans, found me. There are but a few guarantees in life, and I’m about to share one of them with you: Love will come upon you, uninvited and unannounced. It will tap you on the shoulder while you’re occupied with working on the relationship with yourself.

Search for love, and you’ll end up with its imposter. Love has a target on your back. Not the other way around. Let it find you.

Now, what to do with love afterward is another story.